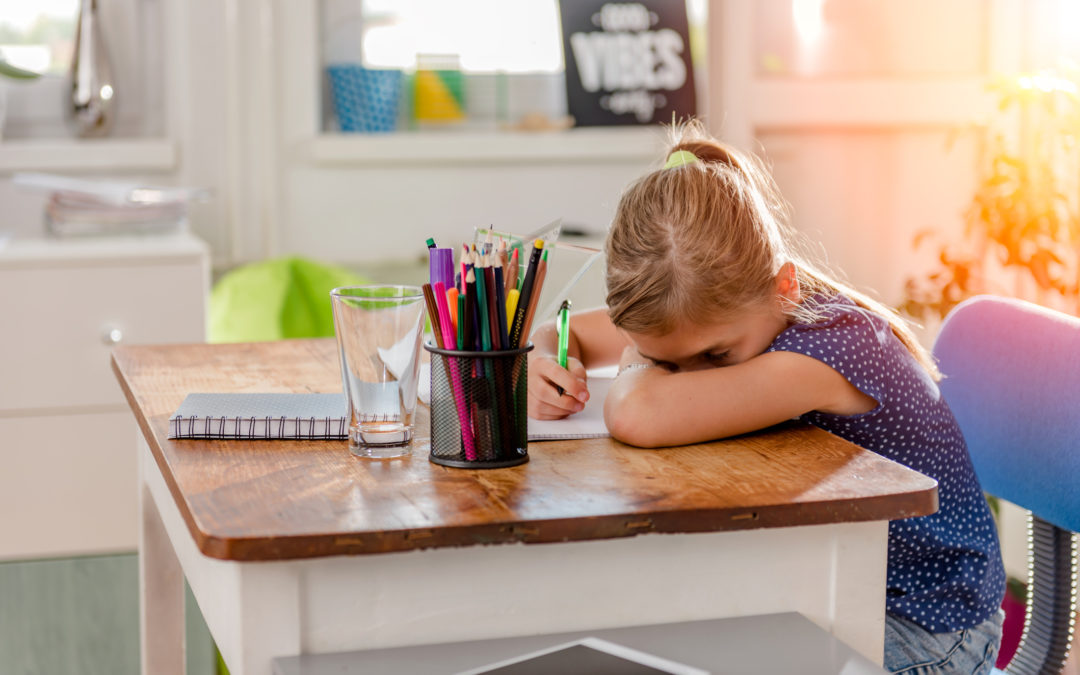 Young children are by and large overactive, inattentive and impulsive. As they mature, they acquire the skills to modulate their activity; both in terms of its amount, and one important characteristic of it, its impulsivity. At the same time, they develop the presence of mind to maintain attention. In short, they learn the skills of self-awareness, self-control and vigilance. They learn to self-regulate.

Thus, children grow and mature out of that phase of hyperactivity impulsivity and inattention; a normal phase of development, seen in toddlerhood.

Those children who do not grow out of the hyperactivity impulsivity and inattention of toddlerhood, but who do continue to develop normally in other areas, present with a problem. In the significant majority, the skills of self-regulation develop, albeit at some time later in childhood.  And in the meantime, they suffer from ADHD. Consequently, we call ADHD a developmental disorder.

2. The meaning of the words

You may well be confused by ambiguity surrounding the terms when we talk about ADHD. What exactly does attention deficit mean?

The word attention is a noun, and it describes a mental state, the state of paying attention; ‘his attention was diverted from the matter at hand’. Phrases like ‘to pay/give attention to’, ‘to be engrossed in’, ‘to concentrate on’, ‘to be immersed in’ all seem to mean more-or-less the same thing.

Inattention is the absence of, or at least the insufficient presence of, attention, such as: ‘not being attentive to’, ‘not being engrossed in’, and ‘not concentrating on’. But how do we as parents know our child is inattentive at any given moment in time? After all, attention is a quality of our child’s mental state, and we are not mind-readers. We assume our child is being inattentive because that is the look of his manner/demeanour/attitude. And, whilst not being a mind-reader, his mother knows him better than anyone, better even than himself.

A similar analysis could be applied to the term activity. But it relates to something more observable, more objective, that your child’s mental state. It concerns your child’s physical movements. Nonetheless, a child’s level or amount of activity is still difficult to quantify. Hyperactivity means more than the normal amount of activity; remembering normality is a range, not a point. Overactivity is a synonym of hyperactivity.

Impulsiveness and impulsivity are also synonyms. They describe a quality of the activity; activity that happens unpredictably, with little if any forethought or reflection, and little or no consideration of the consequences; behaviour that shows spontaneity in excess.

There is no single definitive test that can establish the diagnosis of ADHD. Diagnosis rests upon the opinion of the clinician involved. Clinicians can be wrong, and therefore diagnoses can be wrongly applied, or not applied as the case may be. That is why I take care in assessing the patient. Good diagnostics is the key to good therapy. So I was taught many years ago; so I have discovered in the three decades I have practiced as a Consultant Paediatrician.

Criteria to guide clinicians in the diagnosis of Attention Deficit Hyperactivity Disorder are published. The most widely used set is found in the Diagnostic and Statistical Manual – Edition V Text Modified (DSM-5TM) of the American Psychiatric Association. These criteria are used by the large majority of clinicians in practice in Australia, myself included.

The DSM Criteria are too complex to set out here. However, I would like to highlight a couple of important parts of the assessment:

As a result of this, I will ask in detail about your child’s performance, developmentally, academically, socially, emotionally and behaviourally; and in different settings. As is so often the case in medicine, the history is all important. And that is why I spend such a long time taking it.

In Australia, the diagnostic assessment is made by a medical practitioner: a paediatrician, a neurologist or a psychiatrist. All three are specialists, and patients need a referral.

The physical examination often does not contribute much to the diagnosis of ADHD, however it should be performed as it is integral to a thorough assessment. Many a time I have picked another problem, unrecognised at the time, in the physical examination.  In general, pathology and radiology investigations are not called for. Some clinicians recommend an EEG, but they are the exception. There is little if any justification published in the scientific literature to support the practice, and most clinicians do not perform an EEG, myself included.

Behavioural Rating Scales are however a different matter. In my view, a behavioural rating scale is essential in establishing the diagnosis. I use the Connors Questionnaire, by Keith Connors. In my view it is the gold standard. Unlike the Connors, many other behavioural rating scales are not standardised, and therefore conclusions drawn from them are not valid. Those that are downloaded from the Internet are usually not standardised.

The Connors is performed by parents, and by the school teacher (and sometimes by the child). It provides information on performance and behaviour in the settings of home and school; fulfilling one of the criteria needed for the diagnosis to be made.

In my view there is little point having a Connors performed before the initial appointment with me. First of all, I will take at least two consultations to get through the history, the physical examination, and discuss with the parents my findings. I generally consider the results of the Connors Questionnaire at the second appointment; having organised for it to be performed at the end of the first.

If the diagnosis of ADHD is made by me, I will recommend to the parents a course of treatment. This will almost always include a medicine. The decision to give parents advice to use a medicine in the management of their child’s problem is not a trivial one, and I do not take it lightly.

I will also give advice regarding other aspects of the management program. Those aspects I discuss below, under The Principles of Management of Attention Deficit Hyperactivity Disorder.

THE PRINCIPLES OF MANAGEMENT OF ATTENTION DEFICIT HYPERACTIVITY DISORDER

It is often said that there are two pillars to the management of Attention Deficit Hyperactivity Disorder (ADHD): medication and behavioural management. The use of the medicine in ADHD can be life transforming, but usually whilst the benefits are real, they are not that great. The medicines we use are very safe. They have their side-effects, but their side-effects can be managed. The use of medicines is nuanced. Getting the right medication, in the right dose, with the right regimen of administration can take a little while, and usually does.

In the treatment of ADHD, medicines should not be referred to as drugs. The term ‘drug’ is a jargon term, used by we clinicians within the health industry, amongst ourselves. Use of the word ‘drug’ to describe a medicine in everyday speech is pejorative, and mischievous. To children, including those with ADHD, the term ‘drug’ describes a substance that is both illicit and illegal. It’s use to refer to ADHD medicines causes them nothing but confusion. Health educators and teachers who use the term incorrectly should be criticised heavily.

Unfortunately, whilst behavioural management is considered essential, too often lip service is paid to implementing it. I hold a different view. I focus on behavioural management as an integral part of the program, and I believe great gains can be made in skill development in children with ADHD through the proper implementation of good behavioural therapy. In general, I do not refer children with ADHD to another clinician, I give that advice myself. I believe I get better results in most cases.

In addition to medication and behavioural management, general lifestyle measures and remediation of specific problems are important. ADHD can interfere with development, manifesting in problems in academics, in psychological well-being, socially and behaviourally. When problems are relatively minor, they can be dealt with by tuning the lifestyle. That is not to say lifestyle tuning should not be applied to all children, it should. Children thrive in a well-regulated, predictable and balanced lifestyle. I mention the adverse impact of excessive electronic gaming and social media.

These problems are generally of two types:

Finally, the management of ADHD in any given child usually needs constant adjustment. The child develops and matures, day-by-day. Things change, and the impact of ADHD changes with them. It is never okay to simply set-and-forget the management. I review patients 6 monthly when the child is stable, and things are progressing well. I review the more often, when need arises.